Creator of Pictures in Wood


Kira makes pictures in wood using a woodburner.  The varying textures and wood tones look like layers of different wood, but instead come from choices of tips for the woodburner.  “There is no layering... if you touch one of the pictures you will feel the indentations – some of them deeper than others -  [of] the pen – it’s not really a pen but the woodburner – burning itself into the wood.” 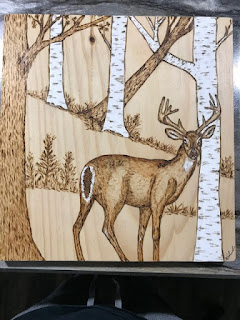 She uses color on a few of her works, but most of them are in the colors of the wood itself.  For the natural colored ones she uses  "... different tips ... it looks almost like a pen, and the tip is different.   And the one I use has different wires on it and some of them make better .. curves, some may shade better.  … I have a tendency to use the same one that I like over and over again ..." 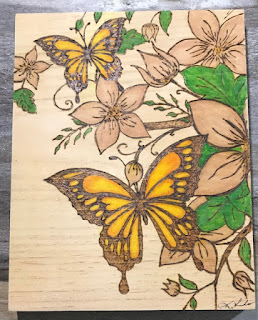 Kira is inspired by her mother who was an accomplished artist in pencil and watercolor.  As she found her creative spirit grow Kira tried many different media, settling on wood-burned pictures, supported by her husband who clear coats the pictures, builds frames and encourages her with select tools.  Kira is clear that doing art is her time for herself, for her self-expression.  Nevertheless, she participates in a few craft shows each year where she sells her work.

You will be able to view some of Kira's creations this September at Catskills Folk Connection's exhibit, "Folk Art in Wood" at Hanford Mills Museum.  It will run through September and end with the Museum's Woodsmen's Festival in early October.  Should we not be able to present the exhibit for in-person viewing, there will be an on-line exhibit at Catskills Folk Connection's new website, now being designed.