Ken Etts lives on the acreage his grandfather farmed in Montgomery Hollow, Roxbury NY.  He and his wife Toni run a successful dog kennel and grooming service as a retirement business.   Ken, known locally as "Chub",  made a living in car body repair and had a reputation for being able to shape metal and bondo so sensitively that his work was commonly called "artistic."

Ken's contribution to the exhibit "Folk Art in Wood", to take place in September, is neither metal nor bondo.  By chance, I had my cell phone when I encountered Chub at the convenience store and somehow the conversation came around to the whistle stick.  He quickly retrieved one from his truck and demonstrated it for me. [Please forgive my un-huhs and clucks during the recording!]  The wood carving - notches taken out of edges of a square "dowel"- is a technique that characterizes some folk creations called "tramp art" that are often included in exhibitions of Outsider Art.  In the whistle stick the notches are more functional than artistic.  Watch the video and see if you can detect what makes the propeller turn.  Then watch again to see what makes it reverse direction.  Can you hear the whistle that happens at the same time?

Ken has made several whistle sticks.  He says he learned to make them and to operate them from Joe Hewitt, the legendary state trooper and tradition bearer originally from Denver NY and now living in  New Kingston.  Joe is well-known as a keeper of bees, a student of Native American traditions, and a deep well of local knowledege and skills.  He remembers teaching Chub to make whistle sticks, but said he hadn't made one in a long time, until now.  Joe learned to make whistle sticks from Freddy Hammond, a fellow state trooper who was from Ithaca, "the best friend I ever had in the state police," Joe says. 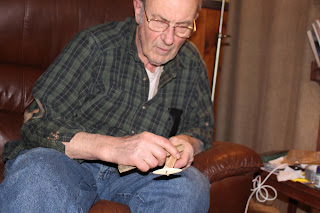 The folk process is usually assumed to be oral transmission from one generation to the next.  But in the case of the whistle stick it seems to be from one adult male to another.  Perhaps this is just a happen-so, because another wood skill Freddy Hammond knew - making a whistle from striped maple bark - Joe had already learned as a child from Ralph Felter Sr., a carpenter who was working at Joe's Dad's farm.  And still in the generational pattern, Joe remembers showing his kids how to make striped maple whistles.  He realizes now that he needs to show his grandchildren how to make and use whistle sticks, passing on both the creation and mystery.

You will be able to view a whistle stick, and perhaps a demonstration, this September at Catskills Folk Connection's exhibit, "Folk Art in Wood" at Hanford Mills Museum.  It will run through September and end with the Museum's Woodsmen's Festival in early October.  Should we not be able to present the exhibit for in-person viewing, there will be an on-line exhibit at Catskills Folk Connection's new website, now being designed.


Posted by Catskills Folk Connection at 10:03 AM