Folk Art in Stone at CCCD

A two-month exhibit of folk art in Catskills bluestone is coming to an end in Arkville at the Erpf Gallery, part of  The Catskill Center.  It is on view through June 7, Monday - Friday 9:30 - 4:00 pm, at 43355 State Highway 28, Arkville, 12406.  There is a last chance to visit the exhibit on the weekend on Saturday, June 1, when the gallery will be kept open just for exhibit visitors.

Catskills Folk Connection organized the exhibit which features two folk artists from Schoharie County, Mark Swanberry and Richard McCormack.  Both artists come from artistic families and work as landscapers, but they carve and embellish their stone works differently.

Swanberry started carving stone plaques and bird baths.  He developed a series of stone lanterns and mini-fireplaces (complete with tea lights), both of which bear details in copper.  Recently he found a way to reproduce his stone carvings in repoussé copper on stone.

McCormack is a draftsman and carves large stone figures, especially fish, in a linear style.  He embellishes slabs of bluestone with paintings of rural scenes, carving the stone to act as a frame.

Catskills Folk Connection endeavors to conserve the diverse cultures of the CAtaskill Mountain Region through documentation and presentations such as this exhibit.  It is supported by Roxbury Arts Group, and is funded in part by  the New York State Council on the Arts Folk Art Program, by Gov.  Cuomo and the NYS Legislature, by an Aciton Grant from Humanities NY and by the O'Connor Foundation.  For more information contact Ginny Scheer 607-326-4206 or vscheer@juno.com.

Note that blog articles about Catskills Folk Connection's programs from September 2018 through April, 2019 can  be found at an alternate blog site: www.catskillsfolk.blogspot.com.

Posted by Catskills Folk Connection at 10:21 AM No comments:

Toe-tapping traditional fiddle tunes will make you want to kick up your heels on Sunday, July 29, from 2 to 5 p.m. when John Jacobson and the Tremperskill Boys play for an old-time square dance.


The dance will be held at the United Methodist Church Hall, 25 Church Street, Phoenicia, NY  12464, located about two blocks off Main Street.  From Route 28, at the west entrance to Phoenicia, follow Main Street across the bridge, skip the left turn on Co. 214 and take the next left which is Church Street.  Approaching from the east, turn right on Bridge Street Extension and on Bridge Street, cross the bridge and turn left at the four corners, which is Main Street.  Then just after the gas station, turn right on Church Street.

Catskills Folk Connection's square dances are designed for new dancers of all ages as well as experienced dancers.  Perfect for family fun.  All dances will be taught; and you need not bring a partner.  Refreshments will be available.

Admission: Adults $7; children 12 and under are free.

Catskills Folk Connection is sponsored by the Roxbury Arts Group, and is funded in part by the New York State Council on the Arts Folk Art Program, by Gov. Cuomo and the NYS Legislature, by an Action Grant from Humanities NY, and by the O'Connor Foundation.

Catskills Folk Connection is kicking off the square dance season with an old-time traditional square dance on Sunday May 20, 2-5 p.m., at the Halcott Grange, 264 Route 3, Halcott Center, NY 12430.  John Jacobson and the Tremperskill Boys will provide the music, calling, and dance instruction, all in the tradition of the late, legendary fiddler and caller, Hilt Kelly.  Beginners welcome.  Partners will be provided. Experience is not necessary.  All dances will be taught.  And refreshments will be served.  Adults $7; children 12 and under are free.  For more information contact Ginny Scheer, Folklorist, 607-326-4206 or vscheer@juno.com.


From December 29 through January 31 on view at the Roxbury Library is Catskills Folk Connection's display "Stone in Winter", exhibiting photos of Roxbury's six traditional stone houses.  The display was funded in 2017 through an Action Grant from Humanities New York. Photographed for the display by Jill Ribich, the houses are shown in their winter habitat that emphasizes the shape and texture of the stone structures.  The display was fabricated by Deb Fleming of Sign Designs and features a portrait of each house, showing the design of its facade.  The display is available for public viewing during the Library's regular hours Monday, Wednesday and Thursday 10-5, and Saturday 10-2.

Constructed in the first three decades of the 19th century, the Roxbury stone houses share common traits, but yet are distinctive one from another.  Two of them, among the earliest, are two stories high with a symmetrical facade and refined details, such as contrasting brick trim or a version of a Palladian window, that bespoke the influential status of the first owners.  The others are one story high, two with the same symmetry of facade, two with doors that are off-center.

Three of the houses share the feature of having a walk in cellar.  Dan Underwood, descendant of the builder of the Oliver Underwood House, explained that this was not unusual in stone houses because he understood that the builders kept the cellar open as long as possible so the stone boat or wagon could be driven right into the cellar hole, easing considerably the labor of transferring stones up to the walls.  At the Hardenburgh House the on-grade cellar door led to a store, while in the Underwood House it led to a cellar kitchen.

The display at the Roxbury Library includes information about each house, as well as the winter portrait for each.  More information can be found in The History of the Town of Roxbury by Irma Mae Griffin, available to borrow or purchase at the Library, 53742 State Highway 30, Roxbury, NY  12474  607-326-7901.

Catskills Folk Connection is sponsored by the Roxbury Arts Group, and is funded in part by the New York State Council on the Arts Folk Art Program, by an Action Grant from Humanities NY, by Gov. Cuomo and the NYS Legislature, and by the O'Connor Foundation.

Posted by Catskills Folk Connection at 2:08 PM No comments:

Saturday, October 28 at 2 p.m. Neil Larson will present a talk about the six stone houses in Roxbury and their architectural traditions.

Mr. Larson is well-known in the field of historic preservation and architectural history.  His talk will consider the Roxbury stone houses in the context of northeastern building patterns and also of comparable stone structures in the Hudson Valley.  Join us for an interesting and informative afternoon.

Tonight on WIOX at 6 p.m. Photos for 2 Hour Program


Posted by Catskills Folk Connection at 3:13 PM No comments:

Young Fiddlers at Fiddlers!24 in Roxbury

Traditional fiddler Jackie Hobbs of the New York Old Tyme Fiddlers Association brought her youth group to Fiddlers!24, the annual October event at the Roxbury Arts Group Last weekend.  Called "Fiddlin' Future", the group is a youth chapter of the Association, and includes some pretty amazing fiddlers.  Here's is a photo of Jackie's kids playing with the professional performers at Fiddlers!24's jam. 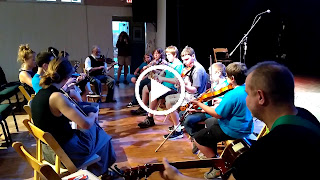 Listen to WIOX tonight for a non-scheduled edition of Catskills Folk to hear just the audio of Jackie's kids and  more about the performances at Fiddlers!24.  91.3 FM or streaming on line at WIOXradio.org.
Posted by Catskills Folk Connection at 3:58 PM No comments: